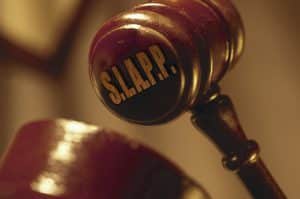 What is a SLAPP Suit?

CLDC lawyers have been successful in defending social and climate justice activists and organizations from SLAPPs (strategic lawsuits against public participation), which are designed to chill free speech — notably dissent.

Deep-pocketed corporate bullies have a long, shameful track record of filing SLAPP suits to intimidate climate justice and other progressive activists and organizations. And they keep filing them, for the sole purpose of draining activists’ resources, wasting their time (which impacts the effort that people can contribute to social movements), and causing anxiety. All of these factors create a chilling effect that harms the exercise of free speech. Examples include defamation (libel and slander) lawsuits against people for simply speaking out against corporate wrongdoing.

SLAPP suits typically charge the defendant-activist or organization with defamation or some other form of tortious misconduct, framing the lawsuit as legitimate when the actual goal is to intimidate and silence activists and target the right to free speech.

The CLDC is a national expert in defending activists and their campaigns from the threat of unconstitutional SLAPP suits. We have a large brief bank and legal resources available for lawyers. If you are an attorney representing environmental or social change activists, please contact us.

We are a proud, active, member of the national Protect the Protest coalition, which defends those attacked by SLAPP suits and educates activists and the public about them. Through this process we have conveyed, as a coalition, that we stand with one another, and that corporate bullies come after all of us when they come after one of us. CLDC lawyers got both Resolute Forest Products’ and Energy Transfer Partners’ (now known as Energy Transfer) SLAPP suits against climate justice activists thrown out for our clients.

We also defeated the Eugene “Weed Nazi,” who attempted to SLAPP a Eugene-based antifascist activist when she was exposed as a white nationalist. We look forward to winning more victories against malicious SLAPPs!

CLDC lawyers provided legal support for the “Weed 9,” and Water for Citizens of Weed, California (WCWC), nine members of the Weed community who faced a SLAPP suit brought by Roseburg Forest Products in their effort to control a local water source. That SLAPP suit against our clients was dismissed, and our clients were awarded attorney fees under California’s SLAPP statute.

Roseburg Forest Products’ lawsuit came in response to the nine citizen activists voicing their concerns about their small city losing access to a vital public spring water source to the interests of the private logging company. RFP’s attorneys asserted that they were just trying to resolve legal ownership issues regarding the water supply, but neither WCWC nor the nine people RFP’s attorneys named in the suit had ever made any personal claim to the rights or title to the water supply — a fact the law firm admitted at the time. Yet even with that knowledge, the law firm appealed the court rulings and dragged the defendants through two more years of legal proceedings.

Several of the nine activists are former mayors — some who are now in their 80s and 90s. The activists had participated in town meetings and taken other grassroots actions as members of WCWC, to educate their community about the threat to their water supply. After writing a letter requesting assistance from a state agency, and speaking out during a local meeting, they found themselves in court being sued by a $900 million timber company.

California’s SLAPP statute also includes what is known as a “SLAPPback” provision, allowing people who have been hit with a SLAPP suit to turn around and sue the “SLAPPer,” for emotional distress damages and other remedies that go beyond an attorney fee award for having to defend the initial SLAPP suit. In April 2020 CLDC filed a SLAPPback suit against the Sacramento law firm Churchwell White LLP and two of its attorneys, alleging that they engaged in malicious and unlawful conduct when they (on behalf of their client, Roseburg Forest Products) filed the lawsuit against the Weed 9 and WCWC. We recently submitted our final brief on appeal in the “SLAPPback” lawsuit, and hope to have oral argument soon.