Yesterday, organizers of the Latinx community in Eugene brought together nearly two hundred members of the Eugene community to stand against the Trump administration’s repeal of the DACA program. Despite hazardous air quality, the Wayne Morse Free Speech Plaza was overflowing with demonstrators who see the value in DACA dreamers being a part of their community and want to see them safe.

I went as a legal observer for the event, mask over my face to protect my lungs from the fiery inferno around us, and since the cops were mostly leaving the event alone, I did a lot of listening to the many speakers that were brought to the plaza yesterday. What did I learn? I learned that yesterday was the 5 year anniversary of DACA, a program put into place by the Obama administration to offer documentation to undocumented children brought to this country at a young age. It is the type of documentation that allows them to attend university, get drivers’ licenses and secure work permits. I learned that 800,000 children, young adults and adults have accessed the program, and now have the ability to live and work in this country safely, without threat of arrest or deportation. 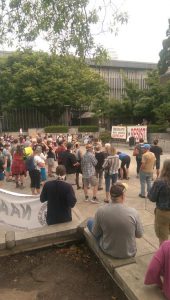 DACA protest at Wayne Morse Free Speech Plaza in Eugene, OR on September 5, 2017. 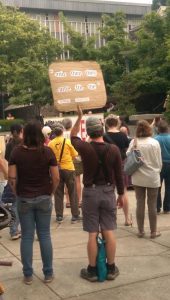 A protester against the reversal of DACA holds a sign with the words “and then they came for me…” (Eugene, OR, September 5, 2017). 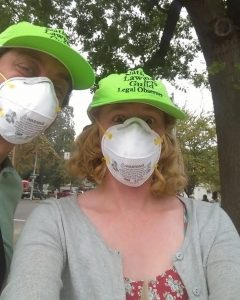 Charles and Erin, ready for anything, masks and LO hats!

I learned that 91%, 700,000 of these DACA-mented humans are employed and paying taxes. And that, if the DACA repeal goes into effect, all of those people could be fired from their jobs, causing a massive hit to our economy. I learned the average DACA Dreamer is 22 years old, and that many of them are finishing college degrees, masters’ degrees and dissertations. As local speaker and Latinx advocate Carmen Urbina put it, “This is a direct attack on the heart of the Latino community by the federal government”.

Further, I learned that anyone who is a DACA Dreamer has been reporting biometrics, their legal address and place of employment to the federal government every two years to receive documentation. As one speaker put it, the Feds made a safety contract with these people in exchange for information about their life and whereabouts. And now with the Trump administration at the wheel, the same information can and will be used to imprison and deport.

If the rally was any indication, this decision is being met with outrage, and people are ready to stand up for DACA Dreamers. Here are some next steps and things you can do from Eugene to support the Latinx community, DACA Dreamers and undocumented people who are our neighbors:

Some of what the training will cover…

Take a moment to share these action items and events with your friends, family and lists!