The Civil Liberties Defense Center (CLDC) and the Water Protector Legal Collective (WPLC) are excited to announce a new partnership to boost legal representation capacity for Water Protectors who were arrested while defending Anishinaabe lands, the upper Mississippi watershed, and our collective climate future from construction of the Line 3 tar sands pipeline. Thanks to a significant grant from the 11th Hour Project, our two organizations have hired an attorney to provide full-time legal representation and support to Water Protectors still needing representation within the Minnesota court system. We’re thrilled to introduce you to Claire Glenn, who will be working collaboratively with our two organizations and the Line 3 community to ensure that all Water Protectors still in need of representation receive capable, movement-aligned legal support as they move through the criminal punishment system.

Claire is an abolitionist trial attorney. She has worked as a public defender in both Hennepin County, Minnesota, and Prince George’s County, Maryland, providing zealous representation to defend the rights of indigent people targeted by the criminal system.  Before becoming a lawyer, Claire led community-based economic development projects with micro-entrepreneurs, rural communities, and communities struggling after the foreclosure crisis in Michigan. Claire graduated cum laude from New York University School of Law, where she was Editor-in-Chief of The Review of Law & Social Change. Following law school, she clerked for the Honorable Paul L. Friedman in the District Court for the District of Columbia and the Honorable Todd E. Edelman in the Superior Court of the District of Columbia.

Providing legal representation for Line 3 Water Protectors is vital – not just for individual “defendants” who have been charged, but to show the opposition that support for Line 3 Water Protectors and the broader Indigenous-led movement in resistance to fossil fuels is stronger than ever. We will continue to defend those who put their lives and freedom on the line for climate justice, for the water, the Earth, and future generations. Ensuring that there is sufficient legal capacity to bring strong court challenges to increased criminalization of climate defenders, such as the felony theft of pipeline charges in MN, or new crimes we are seeing around the country increasing punishments for protests of critical energy infrastructure, will help to stem the tide of systemic corporate and industry manipulation of the judicial system that is clearly designed to deter progressive advocates from exercising their right to protest.

Our Partners and Allies

This project builds upon and is complimentary to an existing, and amazingly dedicated, network of legal support. Modeled after WPLC’s legal network formed during the Standing Rock protests, the Pipeline Legal Action Network (PLAN) community of pro bono attorneys, legal workers, and NGOs is already coordinating legal representation for the majority of the 1000-plus defendants. But while this massive effort has brought an unprecedented level of pro bono legal support to Line 3 Water Protectors, it has reached local capacity. Approximately 100 water protectors remain unrepresented or need alternative representation, and this attorney is intended to fill that gap in the immediate need for direct representation of water protectors.

Please join us in welcoming Claire to this community. 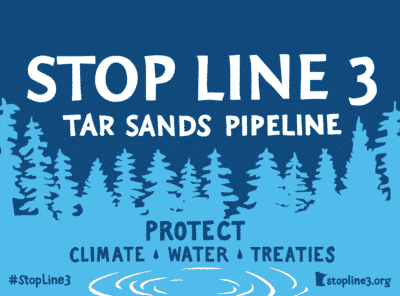 Please support justice for Line 3 Water Protectors by adding your name to the petition to #DropTheCharges HERE.