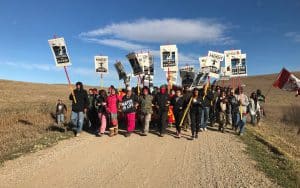 CLDC filed a federal civil rights lawsuit in the North Dakota federal court, and is assisting with a second suit, charging numerous law enforcement agencies and their officers with assaulting and violating the civil rights of peaceful Water Protectors at Standing Rock in late 2016 and early 2017. In the older of the two cases CLDC has appealed a motion to dismiss filed by the defendants. We are hopeful that that older case as well as the more recently filed case will move forward this year.

Our clients were supporting the peaceful opposition to the construction of the Dakota Access Pipeline (DAPL), led by the Oceti Šakowiŋ (the Seven Council Fires, or Great Sioux Nation). The DAPL pipeline, also known as the Black Snake, has now been found to be illegal by the federal courts on multiple occasions.  In late 2016 and early 2017, hundreds of Water Protectors were subjected to cruel and illegal excessive police violence, including the use of water cannons in sub-zero temperatures, rubber bullets and other munitions, copious amounts of tear gas, mace and other chemical weapons, body slams, and other brute force.

One of our clients, Sophia Wilansky, had most of her arm torn off by a munition tossed by law enforcement. Another client, Eric Poemoceah, had his pelvis broken by police while peacefully demonstrating and livestreaming as a journalist. Both deserve justice in the form of government accountability.

In February 2021, CLDC filed an appeal (in response to defendants’ motion to dismiss) on behalf of Comanche Water Protector and videographer Eric Poemoceah. The district court judge dismissed Mr. Poemoceah’s claim without even allowing him the right to obtain documents and sworn statements from the government. In filing the appeal, CLDC and Mr. Poemoceah are asking the Eighth Circuit Federal Court of Appeals to allow him to pursue the justice he is entitled to under the U.S. Constitution. You can read the original complaint HERE.

We first filed suit for Mr. Poemoceah in April 2020 against the Morton County Police Department and other law enforcement officers who had used excessive force and violated his civil rights. Mr. Poemoceah was at Standing Rock in February 2017, peacefully expressing his opposition to the pipeline, when police officers attacked him, breaking his pelvis and then forcing him to walk with that broken pelvis to receive (much-delayed) medical help. Instead of having an ambulance come down the road, or bringing a gurney, the officers mocked Mr. Poemoceah’s requests for medical care as he moaned in pain and politely, repeatedly begged for help. Throughout the interaction, as with other indigenous Water Protectors in the Standing Rock demonstrations, the police officers belittled, dehumanized, and insulted him.

At the time his civil rights were violated, Mr. Poemoceah was livestreaming and unarmed, facing a group of about thirty militarized law enforcement officers clad in riot gear, with about fifteen feet between him and the group of officers. Mr. Poemoceah was calmly, firmly, but not in a loud voice, reasoning with the officers, in hopes of negotiating a peaceful process for allowing elders to leave the Water Protector encampment, which had been in place for several months.

His words to the officers were:

“I know you have a job to do and a family to provide for, but why do it with protecting oil? That’s all we’re trying to do, sir, is protect — protect the water. I know – I know you’re looking at me and I know you just shook your head yes because you have a heart. You have a soul. And I know — you look like a very prayerful man.  Why don’t… you be honorable and set down your badge right now in front of 6,100 people.”

Sophia Wilansky, whose plight gained international attention when she was gravely injured by a police officer who used excessive force in response to indigenous-led protests of the Dakota Access Pipeline. The Morton County Sheriff’s Department and other local government entities have been fighting to have her civil rights complaint, filed in North Dakota District Court in 2018, thrown out, going so far as to outrageously – and without any evidence – posit that it was a canister rigged by protesters, not a flashbang thrown directly at her by a police officer, that destroyed much of her arm. The Sheriff’s Department, which coordinated closely with other law enforcement agencies and private security firms, has also refused to comply with requests to return evidence taken from Ms. Wilansky in the hospital or to provide any documentation of the incident.

On February 1, 2021 U.S. Magistrate Alice R. Senechal made a ruling in Ms. Wilansky’s favor that will now allow her case to proceed. Specifically, she ordered Morton County to request the documents and evidence from every law enforcement agency or governmental entity whose personnel were present in the area of the Backwater Bridge around the time of her injury and to then provide all of that information to Ms. Wilansky’s legal team. The order includes:

As a member of Ms. Wilansky’s legal team, CLDC believes that the evidence of excessive force resulting in the permanent loss of use of Ms. Wilansky’s arm is already sufficiently damning even without this forthcoming evidence, which in light of the County’s multiple attempts to suppress it, is highly likely to provide further proof of wrongdoing. We look forward to continuing to represent Ms. Wilansky in pursuing justice. You can read the judge’s order HERE.

In addition to these two cases CLDC is involved with, there are four other federal civil rights cases we are aware of, two of which are class actions, challenging both the use of force and the road closures and other restrictions of people’s rights during the Standing Rock protests.

Meanwhile, Laney (ex-Cass County Sheriff and past board member of the National Sheriff’s Association) has been traveling around the country pushing the “Standing Rock model” of police misconduct and unconstitutional repression of lawful dissent to local police departments along pipeline routes and other controversial climate destroying projects likely to garner opposition from local communities.