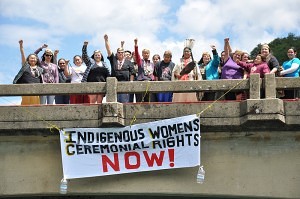 In a major victory for the tribe, the Winnemem Wintu were finally given clearance to hold their coming of age ceremony in peace.

As a result of the incredible perseverance and unwavering commitment of the Winnemem Wintu tribe, along with the overwhelming show of solidarity that so many activists from around the country provided to the tribe, the US Forest Service had agreed to completely close the McCloud River for the 4 day ceremony June 29 – July 3, 2012.

The ceremony was held with minimal disruptions and no arrests. However, there was some harassment from the Forest Service and law enforcement, including the Chief receiving a citation. Why was she cited? For violating her own river closure!

After a Major Step Forward, It’s Not Over

Winnemem Wintu Chief Caleen Sisk and her nephew Arron Sisk were fasting for weeks, demanding that the Bureau of Indian Affairs fully close the site for future Coming of Age ceremonies and protect the tribe’s girls and women from abuse and harassment from the general public.

While this one-time river closure was a significant step in acknowledging the tribe’s rights as Indigenous People, Randy Moore, Regional Forester said they can’t keep the general public from wandering through the ceremonial site because the tribe is not federally recognized. If the tribe was federally recognized, then federal law would give the Forest Service the authority to close the area for the ceremony. But, as it stands now, their hands are tied because of the BIA’s failure to include the tribe on their list.

The Winnemem Wintu, with support from allies, has seen amazing progress recently in dealing with the the federal government. Let’s keep the pressure on! Learn more about how you can show support during this pivotal time!