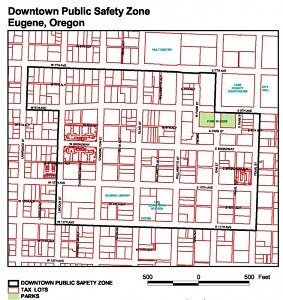 Under the guise of public safety, the City of Eugene enacted the “Exclusion Ordinance” in 2008, a law authorizing police to essentially banish citizens from the downtown. Under this law, the mere allegation that a person has committed a criminal violation (from a long list) can lead to a 30-day exclusion. Actual conviction may result in an exclusion of an additional year (in addition to any other sentencing).

The Exclusion law infringes on a variety of civil liberties, including those to freedom of movement, legal representation, and equal treatment under the law. It also targets marginalized groups of individuals, such as the homeless, who rely on public spaces for resting places, bathrooms, and safety. A similar law in Portland was found to disproportionately impact black communities.

After nearly four years, the Eugene Police Department has been unable to show that the law improves crime or public safety. The City Council decided in February to extend the ordinance until November 30, 2012. At which time, they will decide its fate. The Eugene Police Department was unable to provide evidence that addresses concerns regarding its fairness or effectiveness, leading the City to extend Ordinance, yet again, to provide seven more months for EPD come up with the data.

Tell the City “No” to Another Extension!

The DPSZ ordinance is scheduled to sunset this fall. However, as it has several times before, the City Council simply plans to hold a new series of meetings to examine whether to extend the law. The CLDC and Eugene community have repeatedly expressed outrage at the various hearings in the past. The pressure has helped deter the City from making the DPSZ permanent.

That is why it is crucial that we keep up the momentum and continue to speak out. This law does not represent the needs or wishes of Eugene!

Please stay engaged! Here is a tentative scheduled of the City Council’s meetings related to the DPSZ. For updates meeting schedules, agendas, minutes, webcasts, as well as to contact your council representative, visit the City’s Mayor and City Council webpage.

Template Letter for Citizens to Send to City Council

CLDC Needs Your Help to End the DPSZ

CLDC has joined with citizens, activists, and other organizations in speaking out against this ineffective, discriminatory, and unconstitutional policy. From the streets to the chamber of the Eugene City Council, we have been sharing our concerns on how this law aims to circumvent due process and other constitutional rights, such as those to free speech and equal protection.

CLDC is stepping up its efforts in combating the Exclusion Ordinance. We have formed a legal team to thoroughly explore the array of constitutional concerns associated with the law, and are also supporting community members in implementing a ‘Cop Watch’ program, where volunteers act as witnesses in the downtown and help ensure that the laws are applied fairly. Contact our office if you are interested in getting involved.