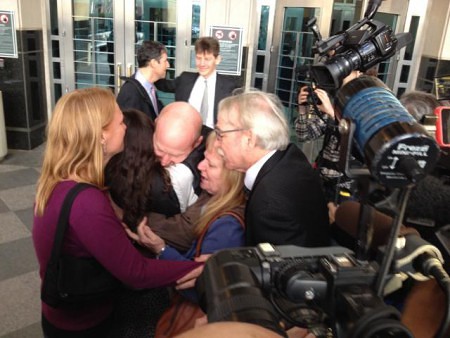 Eric and his family reunited outside jail

SACRAMENTO, CA. On Thursday, Jan. 8, 2015, United States District Judge Morrison C. England granted a joint request by defense attorneys and the Dept. of Justice and ordered Eric McDavid released from prison with time served, because the government withheld documents from the defense at trial. McDavid was arrested on Jan. 13, 2006 and convicted by a jury on Sept. 27, 2007 for conspiring to damage or destroy property by fire or explosive (18 U.S.C. § 844(n)). No such property destruction occurred. He was sentenced by Judge England on May 8, 2008 to 235 months in prison — almost the 20-year maximum. On Thursday, Judge England accepted an alternate plea by McDavid to general conspiracy under 18 U.S.C. § 371 with a maximum sentence of 5 years. Because McDavid has already served 9 years, he will be released forthwith. In exchange for the reduction, the government insisted McDavid waive all claims for civil damages.

McDavid has always asserted he and his two codefendants were entrapped by an overzealous FBI and its then 19 year old informant, “Anna.” “Anna literally herded the group together from around the country, paying for their transportation, food, and lodging,” said Ben Rosenfeld, one of McDavid’s attorneys. “And when they failed to show enthusiasm for her schemes, she berated them and threw fits,” Rosenfeld said. “Any conspiracy that existed was hers not theirs.”

Anna admitted at trial that the FBI trained her to exploit McDavid’s romantic feelings for her by telling him: “We need to put the mission first. There’s time for romance later.” However, she downplayed his feelings as a “slight indication that he might have been interested in me.” In fact, McDavid sent Anna love letters. But the government concealed this and other correspondence from the defense, turning over one letter and ten emails for the first time only this past November. Records reveal that the FBI gave the missing correspondence to a special unit to “analyze…for behavioral insight into Eric McDavid.”

Additional government documents which surfaced only after trial show that the FBI urgently ordered then inexplicably cancelled a polygraph examination of Anna, and that extensive surveillance of McDavid prior to Anna’s influence over him failed to reveal any predisposition to commit the charged offense. “If the government had provided the missing information to Eric’s trial counsel, as should have been done, counsel would have used it to question Anna’s veracity and to show Eric was entrapped. He never would have had to spend nine years in prison,” said Mark Vermeulen, attorney for McDavid.

“Since 9-11, the United States government has mercilessly entrapped people, destroying their lives just to make political examples of them, especially in Muslim communities,” said Jenny Esquivel, Eric McDavid’s partner and an organizer with his support committee. “The government has targeted leftists and anarchists with similar fervor. This, like so many other alleged conspiracies the public hears about, are FBI inventions from the start,” Esquivel said.

“We are thrilled beyond words that Eric is coming home to us after nine years in prison,” Eileen McDavid, Eric’s mother, said on behalf of their family. “We never stopped believing he was wrongly accused. Blessings to all those who made his early release possible.”