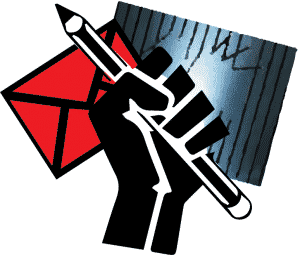 In 2018, do your part to support incarcerated activists!

As we approach the end of one year and the beginning of the next, many of us are thinking about making resolutions for the new year. We have a suggestion: use this tradition of New Year’s resolutions to brighten someone else’s life. One way you can do this is by writing letters to political prisoners. Prisons are designed to be lonely, isolating places where people whose activities, behaviors, or very existence put them into conflict with capital and the state can be kept away from the rest of society. By writing letters to the people who’ve been captured and locked up while fighting for liberatory social change, we can poke little holes into the wall the state has built between prisoners and those of us on the outside, and let our incarcerated comrades know that they haven’t been forgotten.

If you’ve never written letters to a prisoner before, it might seem daunting. You may not know what to write, or feel uncomfortable writing to someone you’ve never met. If you’re feeling unsure, there are several resources online that can help you get started. Here are a few:

This document contains names, addresses, and some biographical information about several political prisoners from a wide array of political movements. If you’re not sure who you should write to, this is a great place to start. Here are just a few of the rad people you can find on this list:

Oso Blanco (aka Yona Unega; aka Robin the Hood) is a Cherokee/Choctaw activist who robbed banks in the 1990s to help fund the Zapatistas in Chiapas, Mexico. Acting on information from a CI, federal agents came to arrest OSO Blanco at his home on August 13, 1999, and a gun battle broke out. He initially escaped, but was found and arrested later that day, and sentenced to 80 years in federal prison. He is now working on decolonization struggles, including a project to reclaim Cherokee land in Appalachia.

Rev. Joy Powell is a reverend from Rochester, New York who was active in opposing police brutality, violence, and oppression. In retaliation for her activism, she was falsely accused by the Rochester Police of burglary and assault, convicted by an all white jury, and sentenced to 16 years by a judge who was open about his personal dislike for her.

In 1996, Alvaro Hernandez Luna was confronted by a police officer attempting to arrest him at his home without a legal warrant. When Alvaro, who was unarmed, questioned the officer’s legal standing to arrest him, the officer drew his gun. Alvaro had ample reason to fear being murdered by police, so he defended himself by disarming the officer, but managed to do so without causing injury. He then fled into the mountains, but was eventually captured. He was convicted of threatening an officer, and sentenced to 50 years.

These sites provide suggestions and guidelines for writing letters and sending care packages to prisoners. Prisons can be very strict about what they do and don’t allow in terms of format and content, and these resources will help you navigate those regulations, and what you should and should not say in a letter to a prisoner, as all letters are read by prison staff!

IGD’s Bloc Party: Everything You Need to Know About Writing to Prisoners

One more resource: Us! If you have any other questions about who to write to, what to write, or anything else, let us know and we’ll do our best to help you out.

Prisons can be dreary, colorless, hopeless places. By making a commitment this year to reach out to political prisoners, we can try to bring a little color and hope into their lives.