Minnesota Supreme Court Grants Use of the Climate Necessity Defense: We Are Trial Bound!

Minnesota Supreme Court Grants Use of the Climate Necessity Defense: We Are Trial Bound!

Update: The trial will be October 8th-11th.

In 2016, five brave individuals, now known as the Valve Turners, turned off all 4 pipelines bringing tar sands oil into the US from Canada for a day. There have already been 3 trials (with Lauren as one of the trial counsel), in Washington, Montana and North Dakota. In each state, the judge has denied the request of the legal team to use the Necessity Defense… until now! On July 25th, the Minnesota Supreme Court ruled that Annette, Emily, Ben, Steve and their lawyers can proceed arguing their case the way that they believe it should be argued to a jury of their peers.

Right now the CLDC is buckling down, as Lauren Regan will be the lead trial attorney on this landmark case for the climate movement, along with co-counsel Minnesota based Tim Phillips. She and the rest of the legal team are pulling together pre-eminent climate science and policy experts, fine tuning their witness lists, and creating specific jury instructions for this unique case.  We are incredibly grateful to everyone who has generously donated their time and expertise to this case and are humbled and excited to share their wealth of knowledge with the Clearwater County jury and the world!

Support the Climate Necessity Defense and this historic trial by donating today! 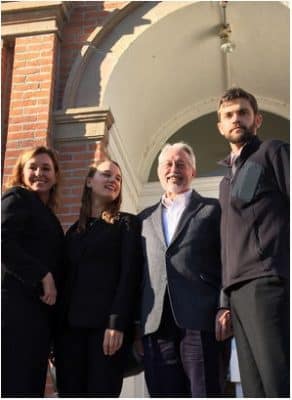 However, if you’ve been following the Valve Turners cases around the country, then you have heard them talking about why they chose to take their action. They say plainly that we are in an emergency, that all the legal methods have been tried, and that it is only reasonable to act as such. Reading the Court’s opinion, it is as if one of Valve Turners wrote it themselves– especially noting previous rulings that hold “the necessity defense applies in emergency situations, where peril is imminent and the defendant has no other option but to violate the law.”

It is significant that this will be a 12-person felony jury trial, where a jury of Annette, Emily, Ben and Steve’s ‘peers’ will have the opportunity to consider the scientific and political realities that the Valve Turners and so many others have been trying to impart upon the world. This is a pivotal moment for the legal arm of the climate movement: can we convince a jury, using science and hard facts, that the emergency facing our planet is real, and direct action by the people and for the people is warranted? Set against a backdrop of the Orwellian Trump regime, where many assert that climate science is a hoax, and set in the far north of Clearwater County, MN—a county that has seen a huge influx of oil infrastructure since the Bakken shale boom—this will be no small task.

Still, Regan remains optimistic “As long as we can get a jury that is willing to remain fair and unbiased, we don’t even need or want them to be climate movement oriented, but as long as they take their oath as a juror seriously and uphold the constitution, then we are confident that our clients and our experts will overwhelmingly convince them that their act of civil disobedience was justified in light of catastrophic climate change.   Our case is strong and, as we’ve seen in the previous Valve Turner cases, the facts are compelling. Jury members in Montana and Washington, for example, thanked us for educating them about climate change, and if given the necessity defense, may have acquitted our clients.”

We want to sincerely thank our local counsel and legal team members for all of their extremely hard work and generosity:  Ralph Hurvitz (Ken’s WA case), Herman Watson IV (Leonard’s MT case), Mike Hoffman and William Kuershner (Michael and Sam’s ND cases), and the Climate Defense Project.  We couldn’t do the national activist defense work we take on without our local counsel! Thank you very much!

We need your support to fund this historic trial! Defending the Valve Turners and fighting for the Necessity Defense across the country is expensive and we can’t do it without your support. Can you donate today to help fully fund this climate trial?

Check back in October for daily updates from the courtroom as this groundbreaking case unfolds!

Updates on the rest of the Valve Turner Cases:

Washington:Ken Ward has appealed the denial of the necessity defense.  Our oral argument on the appeal will be heard in November or December (date unkown at this time).

Montana:Leonard Higgins has also appealed the denial of the necessity defense and we are in the early stages of his appeal.

North Dakota: Michael Foster is now out of jail and his appeal is also in the early stages.

Help support our work defending the Valve Turners and fighting for the necessity defense by donating today!

If you would prefer to donate by check you can mail donations to: Civil Liberties Defense Center, 1430 Willamette St., #359, Eugene, Oregon 97401.

The Civil Liberties Defense Center (CLDC) is a non-governmental 501c3 nonprofit, supported by individual and community contributions, donations to the CLDC are tax-deductible to the fullest extent of the law. Our tax ID number is 58-2670951.