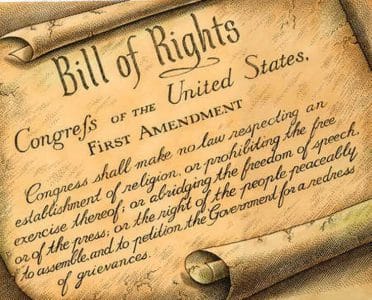 The lawsuit, filed by Sherman in the San Francisco Superior Court in September, alleges that Sherman was injured by defamatory statements after anonymous individuals published an article claiming Sherman is a neo-Nazi/white-supremacist. The article included screen-shots allegedly pulled from Sherman’s anonymous twitter account, messages from another online platform (Discord), and information from other social media accounts allegedly belonging to Sherman. The lawsuit was filed on behalf of Sherman by attorney William Johnson, chairperson of the racist “American Freedom Party” and proponent of a constitutional amendment that would restrict citizenship in the U.S. to only white people. The lawsuit alleges that following the publication of the article on Eugene Antifa’s website, Sherman was effectively excluded from the local cannabis industry in Eugene. The suit alleges three claims against the author(s) of the article: 1) defamation; 2) violation of right to privacy; and 3) intentional interference with prospective economic relations.

Shortly after filing the suit, plaintiffs subpoenaed the webhost service of the Eugene Antifa website, Weebly Inc., in an attempt to unmask the identities of the author(s) of the article as well as visitors to the website.

CLDC also argued that plaintiffs failed to meet the basic pleading requirements that would permit a court to compel production of the identities of anonymous speakers engaged in protected political speech. In California, if a plaintiff wants to uncover the identity of an anonymous speaker engaged in protected speech, the plaintiff must set forth sufficient facts and evidence to support their defamation claim. The burden is on the plaintiff to show that the alleged defamatory statements are false. As with many other SLAPP[1]cases defense counsel have litigated, plaintiffs completely failed to identify any speech on the part of our anonymous client(s) that could constitute defamation or support the other two claims noted above.

Additionally, plaintiffs appear to be forum shopping: the fact that plaintiff Sherman is an Oregon resident, her business was based in Eugene, OR, and the article was posted on the Eugene Antifa website makes it puzzling that plaintiffs claimed that all of their injuries occurred in San Francisco. From the face of plaintiffs’ complaint, it is clear that the only connection to San Francisco is Weebly, Inc., which is based out of San Francisco. Indeed, the lawsuit appears to be an attempt to simply unmask the authors of the article and the identities of people that have accessed the Eugene Antifa website.

The CLDC is committed to fighting this and other meritless SLAPP suits as well as supporting people who stand up to Nazism and other forms of white supremacy. A hearing on the motion to quash is currently set for November 9.

The CLDC does not charge for its services in cases like this. Instead, we depend on the grassroots support of people around the country. If you would like to sponsor our work in this case, please consider making a contribution here (simply type “antifascist” in the note/comment section).