Back to the War Zone

Back to the War Zone

I’m writing to you from the Minneapolis airport on my way back to Standing Rock, N.D. CLDC is coming in with full brains a blazin’ this time. I am accompanied by CLDC’s cyber security education coordinator (and political economist), Dr. Jamil Jonna and CLDC member and psychologist Dr. Erin Chaparro. We will defend water protectors in court and help organize court support for over 470 arrestees; we will pursue the civil rights actions we are working on against cops and jails; Jamil will ensure computers and communications are as secure as possible; and Erin will lend support to the water protectors and the youth of Standing Rock, hundreds and thousands of whom are now suffering from trauma caused by violent, militarized police and the constant surveillance and harassment by cops and DAPL’s private security goons.

I am also very excited to report that CLDC Advisory Board member Richard Monje—International Vice President of Workers United (SEIU) in Chicago and Manager of the Chicago & Midwest Regional Join Board (CMRJB)— will also be joining us at Standing Rock. Richard has been at the forefront of the fight against the attack on workers in the Midwest and the CMRJB is renowned for its organization of low-wage workers. Richard and many of his union comrades have raised donations and supplies and have driven a caravan to the Standing Rock camp in solidarity with the indigenous climate movement. Cross movement organizing will be of critical importance in the days, months and years ahead. Strengthening the bonds between our movements will be essential for the struggles ahead.

As I packed my bag last night (gas masks are awkward in your roller suitcase) I was frequently interrupted by phone calls from Standing Rock. In somber and exasperated tones, friends and activists informed me that the police were putting up razor wire around the camp. The militarized police force was amassing and the camp seemed to be crawling with undercover law enforcement. Despite the fact that government agencies and even President Obama told DAPL and Energy Transfer Partners (ETP) to cease and desist their efforts to begin drilling under Lake Oahe—a federally owned lake near the Standing Rock Sioux territory—DAPL has continued to amass drilling equipment and appears poised to ignore the hold the Army Corps of Engineers placed on the permit to drill beneath the lake–tribes and any other stakeholders be damned. Clearly the only issue DAPL cares about is its own profit and greed. The indifference of ETP can be seen from the following infuriating statement from one of its spokeswomen: “Construction is actually complete in North Dakota, except for the bore under the lake, so there is nothing for them to stop.” I believe the water protectors have a very different perspective. In fact, I know they do. The camp is filling up with people willing to put their bodies on the line. The next two weeks will prove critical to the resistance. If there was ever a time to join the resistance to this pipeline in solidarity, it is now.

I’ve also been thinking a lot about the extreme environmental racism taking place here, particularly in light of the unfathomable victory of a racist-sexist-climate denier as the president of the United States. 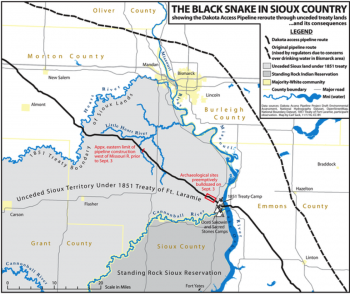 Source: Carl Sack, “A #NoDAPL Map: This pipeline could endanger the drinking water of millions,” The Huffington Post, 11/2/2016.

Many of you may know that a previously proposed route for the 1,172-mile pipeline had it crossing the Missouri River north of Bismarck, North Dakota, according to a document filed as part of the permitting process. The eventual route that was ultimately decided upon, and is currently in construction, moved the water crossing of the fracked-crude oil pipeline 50 or so miles south of the North Dakota capital, just upstream of the Standing Rock Sioux reservation. The Army Corps rejected the pipeline south of Bismarck to protect wells that provide drinking water to the mostly white population of Bismarck (92.4%). As with the Keystone XL Pipeline route, and many other such projects, the environmental racism of a wealthy, powerful white elite has all but ensured the eventual environmental tragedy this pipeline will cause at the expense of Indigenous people. Just like the good white folks of Bismarck, the Missouri river serves as a primary drinking water source for many Native Americans (including the Standing Rock Sioux and others) who live downstream. If it was dangerous to dig under the Missouri near Bismarck, it is only more dangerous to dig under the Missouri near Standing Rock. Any distinction to the contrary is concocted out of unequivocal racism. Recently Rev. Jesse Jackson came to Standing Rock and called the “reroute” “the ripest case of environmental racism I’ve seen in a long time” (Yessenia Funes, “Jesse Jackson in North Dakota to Contest Dakota Access Pipeline,” Color Lines, October 26, 2016).

This travesty is all but assured to be repeated in the coming years and is one of the main reasons that solidarity is critical in these dark times. Many have also asked me what I think will happen here with a President Drumpf. Nothing good my friends. Trump has invested in Energy Transfer Partners (the funders of DAPL) and its CEO, Kelcy Warren, gave $103,000 to Trump’s campaign. That money was apparently well spent. Warren told CBS News that he is “100 percent confident” that the pipeline will go forward under a President Trump. True to form, Drumpf has also recently promised to renew the Keystone XL Pipeline project. Clearly DAPL is in a race to the bottom and will be even more willing to continue brutalizing Water Protectors and nonviolent protestors as the tragedy plays out. Now is the time to draw attention to every bank and source of funding for this abhorrent case of environmental injustice.

It’s put up or shut up time for climate activists, workers, families, people of faith, immigrants, racial minorities, women…everyone who accepts the basic fact that water is life, and that corporations cannot be allowed to profit off of climate apocalypse any longer. By building solidarity at Standing Rock we can provide a foundation in the fight for justice for all marginalized communities. If anything is clear after the election, it is that we will have to fight on all fronts, together.

Make a donation to support our work for #NoDAPL