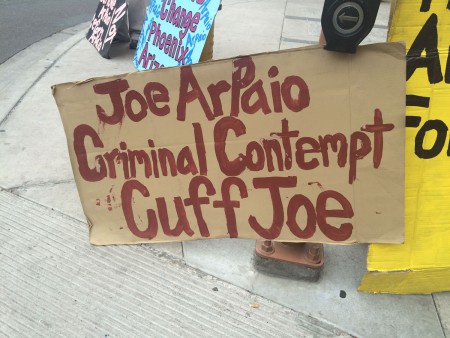 By Rebecca K. Smith, CLDC Board Secretary and Cooperating Attorney

Last week, the U.S. Supreme Court issued a rare glimmer of hope in a case called Rodriguez v. United States. In the case, the court held that police cannot extend a routine traffic stop to use a drug dog to sniff a stopped vehicle for drugs. The court stated: “We hold that a police stop exceeding the time needed to handle the matter for which the stop was made violates the Constitution’s shield against unreasonable seizures.” In other words, police cannot pull you over for a burned out tail light, give you a ticket, and then detain you for another 10 minutes while they use a drug dog to sniff the outside of your car for drugs. However, the dog can sniff the outside of your car for drugs while you are getting the ticket. But after the ticket is issued, police have to let you leave. Basically, the issue is that police cannot detain you any longer than necessary to issue the ticket for the reason that you were pulled over.

This holding is based on the Fourth Amendment, which prohibits unreasonable searches and seizures. Previously, the court held that it was not an unreasonable search to allow a drug dog to sniff the outside of a car for drugs during a traffic stop, even if the owner would not consent to a search and the police did not have a search warrant. That ruling, Illinois v Caballes, was a major strike against the Fourth Amendment’s protection of individual privacy. Last week’s ruling in Rodriguez lessens the blow of that case a little bit.

So why did the Supreme Court unexpectedly issue a decision that will limit police power rather than expand it? Perhaps the recent flood of videos of unarmed black men killed by police during traffic stops is having an effect. Indeed, some commenters are referring to this type of impact as “the Ferguson Effect.” Perhaps all of these recent objective video recordings have caused some people to question their own assumptions and biases about what really goes on during police encounters with people of color in this country.

This brings up another recent glimmer of hope related to the struggle against racial profiling. Last week, a federal court in Arizona held a contempt hearing to address whether Sheriff Joe Arpaio should be held in contempt of court for continuing to encourage racial profiling of Latinos after a federal court held that his practices were illegal and unconstitutional. In 2013, in a class action lawsuit, a federal judge in Arizona ruled that the Maricopa County Sheriff’s Department, led by Sheriff Joe Arpaio, had racially profiled Latino drivers, and unreasonably detained them after traffic stops as part of aggressive and illegal anti-immigration patrols. The judge held that it was unconstitutional to consider race as a factor in determining where to conduct patrol operations, in deciding whom to stop and investigate for civil immigration violations, and in prolonging the detentions of Latinos while their immigration status was confirmed. The judge entered a permanent injunction against the racial profiling practices of the Sheriff’s Department. Two weeks ago, the federal Ninth Circuit Court of Appeals affirmed the district court’s permanent injunction against the racial profiling in Melendres v Arpaio.

However, since the original 2013 permanent injunction was issued, Arpaio has continued to instruct his deputies to break the law and engage in racial profiling to implement an aggressive and illegal anti-immigration policy. So last week, the federal district court judge held a contempt hearing to determine if Arpaio should be held in contempt of court for violating the federal court’s injunction against racial profiling. If the federal judge ultimately finds Arpaio in contempt of court, Arpaio could face jail time, which would be an ironic and fitting end to his tenure as Sheriff.