The Green Scare is the federal government’s ongoing prosecution of environmental and animal rights activists. The name relates to the Red Scare of the 1940’s and 1950’s. It includes the government, corporations, and politicians labeling activists as “ecoterrorists” and national security threats and giving them to long prison sentences.

You can read more about it in Rebecca K. Smith’s article “Ecoterrorism”, a Critical Analysis of the Vilification of Radical Environmental Actitists as Terrorists 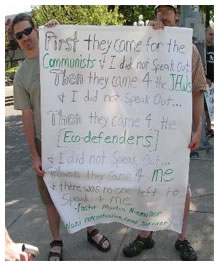 For many it has come to be represented by Operation Backfire, the Shac7, Eric McDavid, Rod Coronado, Tre Arrow, and the Animal Enterprise Terrorism Act.

“A massive and prolonged effort to change the social, political, and economic structure of a local environment cannot be characterized as a violent conspiracy simply by reference to the ephemeral consequences of relatively few violent acts.”