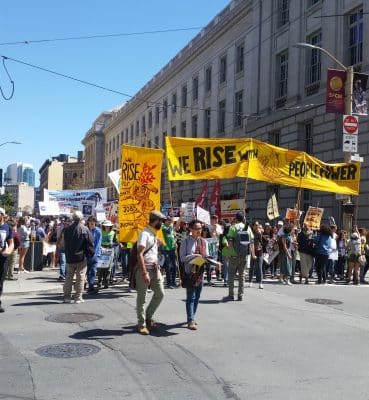 Just as the RISE March was coming into the plaza!

This past week in San Francisco, activists from all over the country (and some from around the world) gathered to teach each other movement skills, and prepare to protest Jerry Brown’s Global Climate Action Summit. A coalition of many groups from the Bay Area, including Ide No More SF Bay and Diablo Rising Tide, planned a week of action to protest this summit and its false solutions. The climate justice movement believes that cap and trade policies and other green business are not the solution to climate change, and that Governor of California Jerry Brown is showing his hypocrisy by continuing to promote fossil fuel production through programs that offer incentives to oil and gas corporations.

CLDC was asked to come provide legal and training support for this convergence of west coast activists in the big city and we were excited to heed that call. Here are some highlights from the week of protest, color, solidarity and radicalism in the streets!

Giving Trainings and Legal Observing for Actions and Marches:

Moving around nimbly from the East Bay to San Francisco, we gave many Know Your Rights trainings and legal briefings in the Non Violent Direct Action trainings that were being put on for activists all over the city. The purpose of these were to prepare people for their roles in the coming actions. They were attended by Fearless Grannies who would go on to block intersections the next day, indigenous folks who were planning to risk arrest later that week, youth who were planning to march in the street, and many other activists, both veteran and brand new! 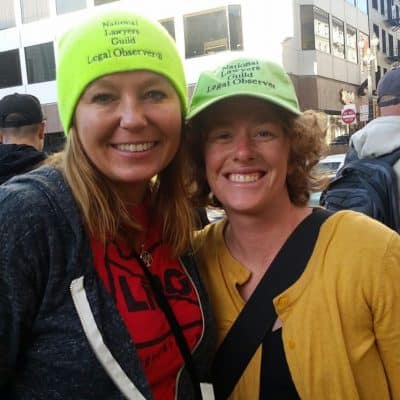 On Saturday, September 8th, we were excited to legal observe for the largest climate march that has ever happened on the west coast. The Rise for Climate March brought out an estimated 30,000 people. It was led by an indigenous block, which included indigenous nations from California, and all of the Western Hemisphere! They started the march in prayer and led the march in a beautiful block of traditional dances, drumming and clothes from their cultures. In the Civic Center plaza at the end of the march, there was a festival for climate justice, with tables detailing local organizing, a youth pop up stage, and dozens of artists painting street murals where there would normally be cars! It was a sight to behold. Despite the large crowd, and the rule pushing street art, the cops stayed calm and respectfully coexisted with the protesters.

After more trainings and preparation, we legal observed for a smaller action at the Governor’s Task Force on Climate and Forests, an opening event for the GCAS. During this event, allies took the streets, while indigenous communities held a rally outside of the building demanding solutions that do no further harm to their communities. A delegation of indigenous tribes from the Ecuadorian Amazon demanded to be let in to deliver a message to Jerry Brown and his task force, that their decisions were having a global impact of destruction and pollution across the world. 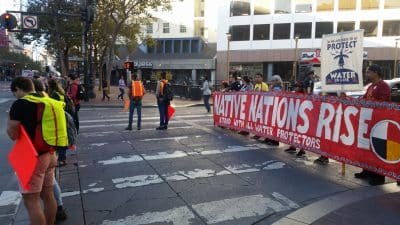 Intertribal Prayer to Save the Berkeley Shellmound

This was a very special event to attend. The Ohlone people hosted tribes and allies who were attending the convergence on their sacred site, called the Shellmound, which overlooks the bay in West Berkeley. After years of colonialism, the Shellmound has been turned into a parking lot, right next to a very expensive strip mall. We gathered with the Ohlone people to listen to and offer prayers for the place they once had ceremonies next to the beautiful Strawberry Creek as it flowed into an estuary and into the bay. This sacred site is currently further threatened by being developed into condos, but the Ohlone people have other ideas for how it could be protected and restored!

More information on the Save the Shellmound campaign!

CLDC is excited to be a part of the Protect the Protest Coalition, which is a coalition of environmentalist groups working to organize against anti-protest lawsuits (commonly known as SLAPP suits or Strategic Lawsuit Against Public Participation). CLDC is a part of this coalition because we have been doing this work for many years, and have been visiting frontline campaigns, training them about this repression tactic, and representing them when they are confronted with a SLAPP suit.

The message of this coalition launch was clear: an attack on one is an attack on all! All participating groups will stand in solidarity when corporations try to repress us with lawsuits. This will mean that these lawsuits have the opposite effect that they want them to have, and the movement will be stronger in the aftermath!