In Standing Rock, The Cops Are Out of Control

In Standing Rock, The Cops Are Out of Control

Since our last update, there have been additional arrests in the struggle to prevent the construction of the Dakota Access Pipeline. In total, over 150 people have been arrested. Just yesterday, charges against Standing Rock Sioux tribe member, Cody Hall, were dropped. During Mr. Hall’s confinement, he reported to Democracy Now that the FBI attempted to question him. Mr. Hall exercised his Fifth Amendment right to remain silent and the feds, subsequently, were unable to question him. The charges against Democracy Now! reporter, Amy Goodman were also dropped. The Court ruled that there was no probable cause for her arrest (that’s an unlawful arrest, just so we’re clear). According to the County, they did not recognize that she was a journalist despite cameras, microphone, and a press badge. Of course, the right to report on political events is not contingent upon the State’s “recognition” or acknowledgement that you are doing so. Many other charges have been dropped against water protectors and other journalists. Perhaps the state may finally realize that they are committing civil rights violations on a mass scale—especially as it pertains to the freedom of the press and assembly—and they might be held accountable. Either way, it looks like that $6-million loan to bolster law enforcement by the State of North Dakota is really paying off. The CLDC is actively briefing these issues for application in a variety of potential future federal civil rights lawsuits. Maybe the state should consider taking out another loan…

Over the last few days, Lauren and I have heard countless stories of police misconduct occurring at or around the Standing Rock Camps. Actually, “misconduct” makes the actions of the police sound far more sanitized and civil than they actually are. Let me start over: The actions of police against the land and water protectors at Standing Rock are depraved, abusive, and disgraceful. They are exceedingly disrespectful and radically humiliating to the people who have occupied this land since time immemorial. They are yet another example of systemic racism, not unlike what is being addressed by the Black Lives Matter and other liberation movements in other parts of the country. But what should we expect? The police—the U.S. government—have always defended the interests of the oppressor, of capital, and of genocidal industrial projects. And it’s worth noting that not once in the history of the U.S. progressive political movement have the police been on the “correct” side of history. They defended (actually came out of) slavery. They attempted to repress the labor struggles in the late 1800’s and early 1900’s. They beat and brutalized protestors during the civil rights movement. They know that the Standing Rock Sioux (and thousands of other tribes) hold this land and water sacred. They are either willingly ignorant of the situation at Standing Rock or indifferent to the sacred nature of the land and water.1 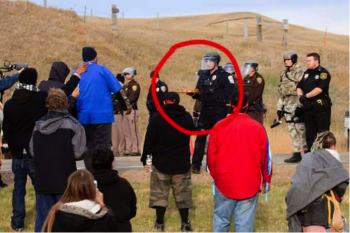 During the last few months, though particularly in the last few weeks, water protectors have been beaten, harassed and strip searched. The police have confiscated sacred drums (pictured to the right) as well as a variety of tools used by tribal journalists. The police have even been “alerting” local farmers, telling them that if anyone trespasses on their land, they have the right to defend themselves and their property. Specifically, local farmers have been told to “arm themselves.” Many of these alerts came in response to baseless allegations of cattle rustling and other crimes. It appears that police are attempting to connect—at least in the media—essentially any and all criminal activity to the water protectors. Never mind the fact that every single action, all rhetoric, and official principles coming from the camps have been non-violent and peaceful. No matter what. When they were beat by cops, no one was violent. When they were strip searched and humiliated, no one was violent. When they were attacked by dogs, the water protectors still remained peaceful. 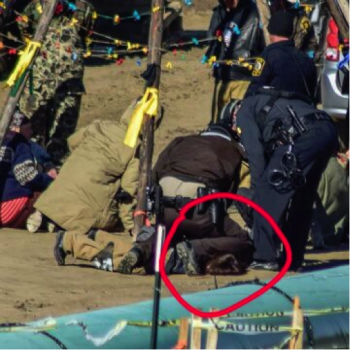 Everyone knew the cops would attempt to classify the protectors as violent; as out of control; as “dangerous.” It’s what the State does in every action in order to justify their militarized presence and excessive use of force. And, in their lies, the intent of the police is clear—extinguish and discredit any and every act of resistance to the pipeline and chill the rights of people who may come join that resistance.

[UPDATE: the roadblocks have now been dismantled]. As part of that policy, the state of North Dakota has erected a permanent or semi-permanent roadblock on the road leading to and from the camps at Standing Rock. If you are traveling south (from Bismarck) to the camps, you will be forced to stop and speak with U.S. National Guard troops. They will ask about where you’re going. They will inspect the outside of your vehicle. You will be photographed. Your vehicle will be photographed. If you are heading north (for most people, that’s from the camp), you will not be stopped, but likely surveilled. This would seem to illustrate that the cops only care about people coming to Standing Rock to exercise their First Amendment rights. If you are leaving, apparently the given reasons for the traffic stop suddenly dissipate.

Now, if you happen to venture out onto one of the many state or county roads in order to get near the pipeline, you are likely to experience a number of repressive tactics from the police. A particularly favored tactic of the cops is to set up roadblocks on these county/state roads to prevent folks from getting anywhere near construction of the pipeline. To be clear, they are blocking public roads for the purpose of preventing protest activity. If you’re out there, here’s the alert you are likely to receive on your cell-phone:

How do the police know where to set up the roadblock? Dakota Access has hired individuals to fly helicopters as well as planes over the camp throughout the day. Some have reported surveillance drones as well. When a caravan is heading to an action, the helicopters simply follow the caravan and alert the police. Keep in mind, these are public roads. In First Amendment Constitutional parlance, these public roads are “public forums.” Your First Amendment rights are supposed to be at their greatest in these places. The police, when confronted with this information, have responded that the protesters are blocking the roads and, therefore, must leave. While blocking the ingress and egress of vehicles is, of course, a crime, the actions taking place on the rural dirt state/county roads of North Dakota are not blocking any traffic…because there isn’t any traffic. 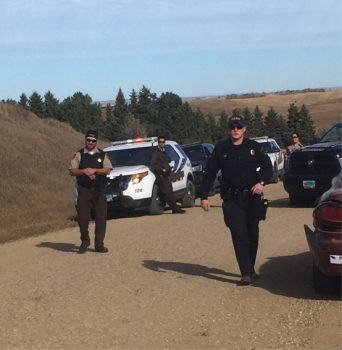 As further evidence that the police know exactly what they’re doing—i.e., violating the First and Fourth Amendment rights of land/water protectors—they have been removing their name-plates and badge numbers contrary to well established legal precedent and police policy. Interestingly, under North Dakota law (N.D. Cent. Code Ann. § 39-03-05), North Dakota State Troopers are required to display, at the very least, a badge number.2 Failure to display the badge number or attendant serial number is, apparently, a Class B misdemeanor.3 At almost every instance, we have heard and seen instances in which North Dakota State Troopers (as well as other deputized police) have failed to follow the basic requirements for displaying their badge number. While reports are one thing, Lauren and I went out to a number of actions as National Lawyer’s Guild Legal Observers. From our observations, all of the reports we heard were confirmed: Not one single officer displayed a badge number. No name plates. Nothing. There was not identifiable information apparent from the uniform other than the uniform itself.

During one instance I was able to speak with one officer (pictured above on the right). I asked him why he and the others weren’t displaying even a badge number. He said that at the beginning of the “protests” officers were getting threats at their homes and their families were being threatened. I asked, “even just with the badge number?” (how would anyone find a name and address off just the badge number-cops personal residence info is highly guarded info)” He did not say anything. I will say, though, the interaction was professional—which may go to show the extent that police will behave themselves in front of attorneys. But, nevertheless, their reasons for failing to display their badge numbers are clear: they want to avoid accountability. They want to continue to act with impunity to the First and Fourth Amendment. They want to continue to pull over native folks—harassing them in all sorts of manner (detailed more in Lauren’s update).

The police have demonstrated zeal over the last few months focusing their resources and energies on one goal: ensuring that the Dakota Access Pipeline is built—and built on time. We see that the cops and their keepers view their role as defenders of private profits and corporate property instead of protecting the public interest in drinking water, sacred sites and attempting to curtail the devastating future threats of climate change. Our role, on the other hand, is to support those who challenge this system. Our role is to support those who are caught in this system. Despite the massive shortcomings of the legal system, there are ways that we can push back. There are ways we can support our protectors. We hope that you will also consider supporting these protectors with whatever talents and resources you possess.

We will be providing updates as often as we can or are able. For now though, we have quite a bit of legal research ahead of us!

Make a donation to support our work for #NoDAPL

1 In anticipation of the obvious objection regarding the police duty to protect the “rights” of Dakota Access, there is an old saying: Between equal rights, force decides.

[2] “The superintendent shall issue to each patrolman a badge of authority with the seal of this state in the center thereof. The term “North Dakota highway patrol” must encircle such seal and below the same must appear the designation of the position held by the person to whom such badge is issued. Each such badge must contain a serial number, or each patrolman shall display otherwise a distinctive serial number. No badge may be issued to any person who is not a duly appointed and acting member of the highway patrol.” N.D. Cent. Code Ann. § 39-03-05.

[3] Any person who violates any of the provisions of this chapter, for which another penalty is not specifically provided, is guilty of a class B misdemeanor. N.D. Cent. Code Ann. § 39-03-12.