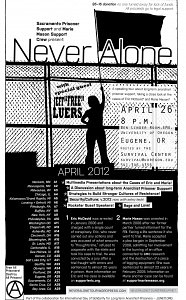 A speaking tour about long-term anarchist prisoner support, taking a close look at the cases of Eric McDavid* and Marie Mason

The tour will be throughout April, across the US. The complete itinerary is available at : neveralonetour.wordpress.com

*Eric McDavid was arrested in January 2006 and charged with a single count of conspiracy. Eric, who never carried out actions and was accused of what amounts to “thoughtcrime,” refused to cooperate with the state and took his case to trial. He was convicted by a jury after a trial fraught with errors and sentenced to almost 20 years in prison. More information of Eric and his case is available on supporteric.org.

**Marie Mason was arrested in March 2008 after her former partner turned informant for the FBI. Facing a life sentence if she went to trial, Marie accepted a plea bargain in September 2008, admitting her involvement in the burning of an office connected to GMO research and the destruction of a piece of logging equipment. She was sentenced to almost 22 years in February 2009. Information on Marie and her case can be found at supportmariemason.org.