Eugene, OR —Today, the Civil Liberties Defense Center filed a federal civil rights lawsuit under 42 U.S.C. sections 1983, 1985, and 1986, against the City of Springfield, its police chief, and 26 of its police officers, on behalf of Black Unity, whose constitutional rights were violated and its members were assaulted and arrested by police at a peaceful march July 29, 2020, and two other people who were injured while filming the interactions of police and an Anti-Black Lives Matter mob that day. Black Unity and its members are primarily engaged in advocating for racial justice and seeks equal treatment of Black lives through education, awareness, and policy change, and strives for equal opportunities for Black lives through protest, engagement and abolition.

In response to Black Unity’s peaceful march and its messages against police brutality and racism, Springfield Police Department (SPD) took malicious, deliberate, and intentional actions to punish, prevent, and impede protestors’ constitutionally protected assembly and speech. The complaint alleges that members of the SPD violated the rights of protesters and others when they arbitrarily halted this peaceful march on a public street in the Thurston neighborhood, while allowing far-right counter-protestors free rein. The march was intended to draw attention to racist symbols, including a noose hanging from a tree that placed Black neighbors in fear. Sometime before the march, SPD Officers went door to door provoking neighbors by warning them of the protest and asking for assistance in shutting down the constitutionally protected anti-racist event.

The complaint alleges the officers’ actions foreseeably funneled the protesters into a gauntlet of violent anti-BLM agitators. SPD casually watched as the anti-BLM mob assaulted plaintiffs and other protestors. SPD officers also told the mob where the police were funneling and corralling the marchers, and actively sought crowd control “assistance” from the counter-protestors before and during the march. SPD is liable for all of these constitutional violations, due to its policies, as well as failures in leadership, inadequate training in the constitutional rights of protestors and reasonable use of force, and failures to discipline racist and/or biased unprofessional police officers. This is the third such civil rights case filed by CLDC in the wake of nationwide protests against the murders of George Floyd and Breonna Taylor at the hands of law enforcement.

To illustrate just one example of the extensive and serious SPD misconduct, footage from a body camera worn by Defendant Springfield officer Conrad on July 29, 2020 records Conrad, and upon information and belief, Defendant Conrad’s partner, Defendant Casarez, discussing the Black Unity march and Plaintiffs. Defendant Casarez made the following statements indicating animus towards plaintiffs:

Casarez: “I want that fat bitch to go to jail.” [presumably referring to a Black Unity supporter].

Casarez: “These fuckers, I wanna lock even more of em’ up.” [statement made after Plaintiff Ford and other BU supporters were arrested.].

Casarez: “Finally, we did something though! Finally! Fuck yeah, dude! When they fucking took that thing off, both things — you good? — and they were trying to shove it back on us . . . and it was comin’ over and I fuckin’ grabbed it and just chucked it back, that stupid 12-year-old [inaudible] took it right in the fuckin’ face [laughter] like just right [inaudible]. . . . At least we fuckin’ took a stand, just once [laughter].”

Casarez: “Five of em’, baby! Five down, how many to go? As many as we need.” [referring to the five BU supporters, including Plaintiffs that were arrested at the blockade.] 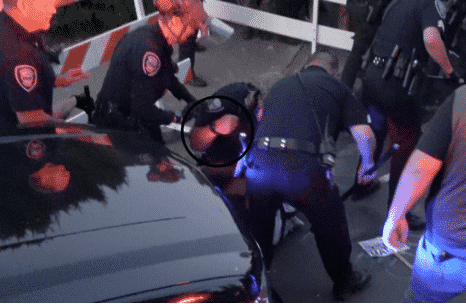 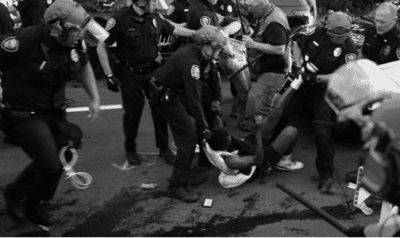 “Black Unity didn’t come to Thurston on July 29th to be violent or to terrorize anyone—in fact we peacefully marched in Thurston in solidarity, and in response to the terror faced by a Black family living in that neighborhood who was harassed and threatened by racist neighbors and their police cohorts. Instead of investigating that situation as a hate crime, police made it worse by overtly protecting those racist factions and attacking anti-racist abolitionists and supporters. As a young Black man, being assaulted and arrested by one of the only Black men on the Springfield police force was traumatizing, but necessary. My arrest by the SPD on July 29, 2020, was revolutionary because it just proved our whole point about discriminatory excessive force used against Black men like me. The Springfield police have proven time and time and time again that they do not value the lives of people of color. It is the hope of Black Unity that community members who are not racist will stand up for Black people who are too afraid to stand up because their life is threatened if they do.”

“What is so troubling about this case is the Springfield Police Department’s apparent collusion with known, violent, far-right counter-protestors,” said Lauren Regan, CLDC Senior Staff Attorney. “Black Unity was lawfully in the streets protesting the simple fact that police have never protected people of color. The police actions here only cement that truth. The appearance of collusion alone is unacceptable for a law enforcement body, especially considering the racist roots of policing and the infiltration of far-right elements into modern law enforcement. It is important to acknowledge that racism is a systemic problem within U.S. law enforcement. This case exposes the reality that the Springfield Police Department suffers from numerous systemic failures and deficiencies that make everyone in our community unsafe — and in particular, presents a deadly threat to people of color.”

“As a Black Unity leader, as a professional in Lane County, and as someone who was born and raised in Springfield, I strongly believe that SPD needs to be held accountable for their biased and dangerous actions. SPD’s blatant actions to not only collaborate with these dangerous counter protesters who call themselves “patriots,” but to also refuse to hold them accountable, created a false and dangerous sense of reality — that if you claim to support SPD’s bias and dangerous tactics in the name of patriotism, then you are superior to those who demand an end to police brutality, racial profiling, and use of excessive force on our Black and brown communities. As a result, this false reality led to extreme violence and danger; as we saw on July 29th as well as when a few of the same “patriots” attacked the Salem capitol. This is not patriotism; this is white supremacy. SPD continues to underline the importance of abolition. SPD is rooted in systemic racism, and the July 29th protest couldn’t have made that more clear. Yet the police are so tone deaf, blinded by their biases and sense of being superior to people of color, that we had to take a stand and ask the federal court to help make our community safer for everyone.” said Claire Reyna, a Black Unity member.

Civil Liberties Defense Center supports movements that seek to dismantle the political and economic structures at the root of social inequality and environmental destruction.​​​​​​​