CLDC in Southern Oregon – Supporting the No LNG Fight

CLDC in Southern Oregon – Supporting the No LNG Fight 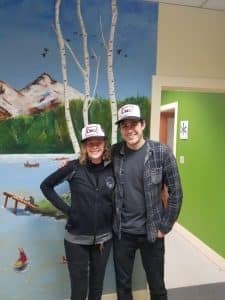 Cooper and I excited to wear the hat, and talk about the pipeline

Last week, the CLDC was invited to give Know Your Rights trainings by two different youth groups in Southern Oregon. Cooper and I happily left our desks and jumped in the car for a long road trip down to the Rogue Valley, and then over the Cascades to Chiloquin, to visit the region and some of the youth most affected by the Pacific Connector Liquid Natural Gas pipeline. The PCP LNG pipeline, if built, will carry natural gas from Malin to Coos Bay, where it will be exported and sold overseas. It is proposed to travel across a good part of Southern Oregon, crossing over 400 waterways, including the mighty Rogue, Klamath, Umpqua, Coquille and Coos Rivers. Should it be built, it would become the largest climate emitter in our state.

First, we visited the Rogue Action Center, a movement hub outside Medford, housing Rogue Climate and Unite Oregon, two grassroots organizations working for racial and environmental justice in their regions. A climate justice group from Ashland High School had invited us to come, and youth who volunteer for Unite Oregon were also invited. There we saw a group of youth that knew how to plan, organize and lead an event for themselves. Many of them had attended a Know Your Rights training before, and they were all intent on empowering themselves to be able to do pipeline activism safely.

Next, we woke up before the sun rose, to drive over the Cascade Mountains to Chiloquin, Oregon, the town that the Klamath Tribal Council calls home. The Youth Council had invited us, because they are interested in being part of the pipeline fight. But they also extended invitation to the rest of the tribe, so the training was attended by adults and youth alike.  We were honored to be received in the beautiful Tribal Council Auditorium, and welcomed very kindly by youth and adult Council members.

During this presentation, tribal members told us stories of racial profiling and of the kinds of violent and unfair policing that they face from the Klamath County Sheriffs’ Department. We also heard from water protectors about scary experiences with law enforcement that they had experienced at Standing Rock. We talked as a group about the trauma that is carried after experiences like this, and some participants said it was enough to make them afraid to participate in activism in the future. At the CLDC we call this “the chilling effect”, when activists are ‘chilled’ out of their participation in their cause because of fear of law enforcement or penalties from the legal system. It is common to feel this way, and that is one reason why we provide Know Your Rights, and other legal trainings for free to this movement. Though we talk about heavy topics, we want folks to feel empowered and emboldened by the knowledge we provide. We encourage anyone who is feeling ‘chilled’ to get trained, KEEP FIGHTING and reach out to us. If we stop because of law enforcement behavior, then their tactics have worked. The youth council members we met embodied this philosophy perfectly, telling us of how they were getting trained in how to do direct actions and how to assert their rights, even in the face of fear of the police.

The CLDC sees the way that youth, tribes and rural folks are all coming together to fight this pipeline, we are very excited and eager to jump on the solidarity boat! We have seen through our work with Standing Rock and Tar Sands Blockade activists, just how much state repression people face when they decide to stand up to oil and gas corporations. We want the PCP pipeline fight to know that we have your back! We know that knowledge is power, and becoming informed about your rights is the way to fight the chill. We also believe that legal support is as much about preparation as it is about responding in a crisis when something goes wrong. We want to create a culture where activists are learning skills to empower themselves and about what kinds of legal pitfalls they are facing BEFORE anything goes wrong. We hope to continue to support the No LNG movement in education and legal support whenever needed! Thanks for the opportunity last week, we hope for many more!