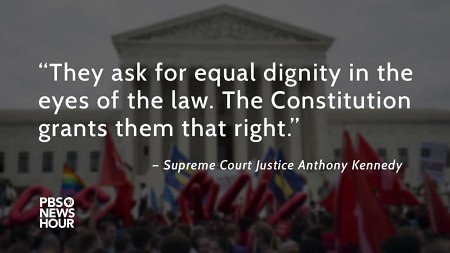 First, in Obergefell v. Hodges, the court followed the growing trend across the globe and held that the U.S. Constitution requires that gay marriage be permitted and recognized in all states. The court noted that “[t]he nature of injustice is that we may not always see it in our own times” and held that “new dimensions of freedom become apparent to new generations, often through perspectives that begin in pleas or protests and then are considered in the political sphere and the judicial process.” In this case, the court held that “[u]nder the Due Process Clause of the Fourteenth Amendment, no State shall ‘deprive any person of life, liberty, or property, without due process of law.’ The fundamental liberties protected by this Clause . . . extend to certain personal choices central to individual dignity and autonomy, including intimate choices that define personal identity and beliefs.” Among these constitutionally-protected intimate choices is a same-sex couple’s choice whether or not they want to marry.

Third, in Texas v Inclusive Communities, the court affirmed an individual’s ability to challenge housing decisions that have a negative impact on minorities. The Fair Housing Act was passed by Congress after the assassination of Dr. Martin Luther King, Jr. and was intended to address persistent racial segregation in housing whereby housing for African-American communities was focused in inner cities and housing for white communities was focused in suburbs. In this case, a lower court had found that the decisions of the Texas Housing Authority to concentrate low-income tax credits for housing for African-Americans primarily in inner-city areas had a “disparate impact,” i.e. a “disproportionately adverse effect on minorities,” and was therefore unlawful. Texas had argued that in order to bring a lawsuit under the Fair Housing Act, the individuals needed to prove a race-based intent by the state agency, not just a race-based impact, but the Supreme Court rejected that argument. As long as there is evidence of a race-based impact, lawsuits can be brought under the Fair Housing Act.

Fourth, in LA v Patel, the Supreme Court struck down a city ordinance that required hotels to keep records of their guests onsite for 90 days and allow any police officer to review those records without a warrant. The court found that there is an expectation of privacy in the records and a police officer’s review of those records constitutes a search under the Fourth Amendment. Without a warrant, such a search is unreasonable. Although government officers may conduct “administrative searches” without warrants, there are special rules and protections that apply to “administrative searches,” and this law did not include those protections.

Fifth, in Kingsley v Hendrickson, the Supreme Court set the standard for police brutality cases in which a suspect of a crime is abused by police officers or jail guards prior to trial. Police officials had argued that the suspect, or “pretrial detainee,” had to prove that the officer intentionally violated his rights or acted in “reckless” disregard for his rights. The Supreme Court rejected their argument and held that the standard for a police brutality claim by a pretrial detainee would be the easier-to-establish “objectively unreasonable” standard for excessive force from the Fourth Amendment.

Sixth, in Horne v USDA, the Supreme Court held that the government must compensate individuals when it takes away their personal property. Although the case addressed government taking of raisins from raisin growers, the case does have implications for other personal property takings. In the past, most cases under the Takings Clause of the Constitution focused on when the government takes real property either by exercising eminent domain or by potentially affecting the value of real property with land use regulations like zoning. In this case, the court clarified that “[n]othing in the text or history of the Takings Clause, or our precedents, suggests that the rule is any different when it comes to appropriation of personal property. The Government has a categorical duty to pay just compensation when it takes your car, just as when it takes your home.”