Activists need to know how to protect themselves. Here you will find a list of helpful materials surrounding Grand Juries. Please contact us if there is something more that you would like to see on this page.

The CLDC is encouraging activists and organizations to utilize the Freedom of Information Act and the Privacy Act to request documents and materials that the FBI may have accumulated about you or the group you are active in. 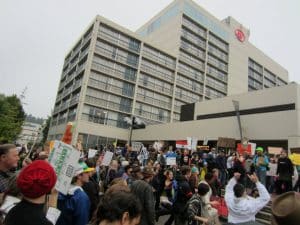 The Civil Liberties Defense Center has published its winter 2011 Newsletter! Inside are reports of the CLDC’s work with Occupy Eugene, interviews with new board members, a guide to filming police interactions and much more. Read the […]

The Other Side Of The Animal Research Debate

MYTH: "We must recognize that scientific research is not only a legitimate career, but also an invaluable facet of medical advancement, conducted by respectable professionals deserving our support. The deplorable actions of these eco—terrorists threaten to impede important medical progress in California and across the country."— Senator Feinstein, Co—Sponsor of AETA

If you think that this law was passed by Congress and your elected representatives with sufficient knowledge, time, and debate, think again. This bill was introduced and pushed by big businesses for big businesses. AETA protects the interests of animal enterprises such as the National Pork Producers Association, Pfizer Drug Co. and other pharmaceutical corporations that engage in cruel and unnecessary animal testing, McDonald's and other fast—food corporations that profit from the sale of factory—farmed animals for food, and Johnson & Johnson, Procter & Gamble and other cosmetic companies that repetitiously abuse animals to test and retest their latest line of beauty products. ( Read more about what goes on behind the walls of animal enterprises.)

An Attack On Your First Amendment Rights

Under AETA it is no longer just the radical underground activists that are targeted for harming the corporate agenda, but also the law—abiding, above—ground activists. AETA is so broad and vague that ordinary citizens may not know that they are acting outside the vast boundaries of this new law. Under AETA, it doesn't take much to be labeled an "animal enterprise terrorist. " Techniques that have been used for years in various social movements are now acts of terrorism if they cause profit loss, including increased security costs, to an animal exploitation business. Those who peacefully protest or engage in undercover investigations can be deemed a terrorist precisely because these actions are purposefully enacted to cause economic loss to a business so that it can no longer engage in the exploitation of animals.

The FBI claims that the Animal Liberation Front (ALF) and the Earth Liberation Front (ELF) are the number one domestic terrorism threat, stating that "from January 1990 to June 2004, animal and environmental rights extremists have claimed credit for more than 1,200 criminal incidents, resulting in millions of dollars in damage and monetary loss."The government cites no human loss or injury because there has never been any. In fact, the ALF credo states that "it is a nonviolent campaign" in which activists take "all precautions not to harm any animal (human or otherwise)." Conversely, FBI statistics also show that there were more than 7,400 hate crimes motivated by race, ethnicity, religion, and sexual orientation in 2003 alone and 450 environmental crimes by industries violating clean air and water laws and inappropriate transportation and disposing of hazardous waste. Since 1977, there have been 13,000 incidents against abortion clinics and doctors, including 7 murders. Between 1991 and 2001 there were 2,100 acts of violence against unions including bombings, shootings, and near fatal injuries. So why, then, is it the animal rights activists who are the number one domestic terrorist threat? Why hasn't the FBI focused their attention on other groups such as white supremacists or anti—abortionists who have and will continue to take human lives and pose an actual threat to the American public?

The Redundancy Of AETA

AETA is a redundant and unnecessary law. For one, there are already many federal and state laws that cover the Animal Liberation Front's tactics. Trespassing, vandalism, burglary, menacing, harassment, graffiti, disorderly conduct, and arson are all crimes. The ALF knows that their actions are illegal, but they are willing to put their freedom at risk in order to "save as many animals as possible and directly disrupt the practice of animal abuse" in the short-term and "to end all animal suffering by forcing animal abuse companies out of business" in the long term. Existing laws that apply to all citizens are sufficient to penalize their actions. There is no need for an additional law that applies only to those acting in the name of animal rights.

In 1970, Congress enacted the Racketeer Influenced and Corrupt Organizations Act (RICO), 18 U.S.C. § 1961, ostensibly to curtail the criminal activities of the mafia. In the forty years since RICO was enacted, the application of the law has extended far beyond the activities of loansharks and the "Don," and into Constitutionally protected protest activities. Over time, the federal courts have gradually made the original intent of RICO — i.e. stopping the criminal activities of the mafia — less and less significant. Instead, the courts have issued interpretations of RICO that consistently ignore this intent and allow the law to be used as a way to silence advocates for social change. Animal welfare organizations such as People for the Ethical Treatment of Animals (PETA), the American Society for the Prevention of Cruelty to Animals (ASPCA), the Humane Society of the United States (HSUS), as well as many others have been victims of RICO prosecutions.

Behind The Walls Of Animal Enterprises

MYTH: Senators Feinstein and Inhofe claim on their website that "AETA gives law enforcement the tools they need to adequately combat radical animal rights extremists who commit violent acts against innocent people because they work with animals. This is terrorism and cannot be tolerated.