This author has not yet filled in any details.
So far Jamil Jonna has created 12 blog entries.

CLDC stands in solidarity with targeted people and communities by assisting them with protecting their Constitutional rights through any legal avenue feasible (federal or state recourse), providing KYR trainings to those communities as requested, and by sharing a KYR resource that has been translated into Arabic by the National Lawyers Guild (NLG).

Our next Coming of Age ceremony is coming up in July, July 20 - 23. Please share this video, and let Forest Service Chief Tom Tidwell (ttidwell@fs.fed.us) know that you expect his agency to work with us to avoid a repeat of his underlings' disgraceful behavior of last year.

US District Court Judge Coffin will be hearing arguments on Occupy Activist Beatrice Semple's challenge to the constitutionality of her arrest 11/8/12 at 11:15 am US District Court in Eugene. The Court will issue a written opinion so stay tuned.

Two police officers with the Eugene Police Department confronted environmental activist Josh Schlossberg as he handed out flyers and information to interested passers-by on the public sidewalk in front of the Umpqua Bank. Mr. Schlossberg was providing information on the negative impacts of some of the business investments of the Bank on the local forests. After one of the officers decided everything was in order, an EPD sergeant with a history of questionable actions against activists and others, investigated Mr. Schlossberg's public activities again.

This legal primer is intended to be a basic legal resource for activists and legal observers involved in protests at or around railroads, ports, and energy facilities. 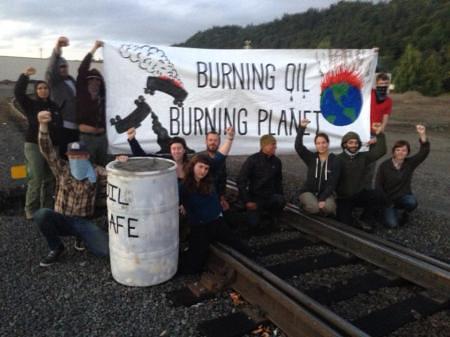 The climate change march in New York on Sept. 21, expected to draw as many as 200,000 people, is one of the last gasps of conventional liberalism’s response to the climate crisis. It will take place two days before the actual gathering of world leaders in New York called by U.N. Secretary-General Ban Ki-moon to discuss the November 2015 U.N. The march, because its demands are amorphous, can be joined by anyone. The Climate Group, for example, which endorses the march, includes among its members and sponsors BP, China Mobile, Dow Chemical Co., Duke Energy, HSBC, Goldman Sachs, JPMorgan Chase and Greenstone. These faux environmental organizations are designed to neutralize resistance. And their presence exposes the march’s failure to adopt a meaningful agenda or pose a genuine threat to power. Our only hope comes from radical groups descending on New York to carry out direct action, including Global Climate Convergence and Popular Resistance.

Know Your Rights for Immigrant Communities

This one hour educational video explains basic rights for immigrant communities and their allies. The purpose of this training is to build solidarity with communities at risk for police and government harassment and to prevent the deportation and destruction of families and communities. This video is not intended as legal advice and does not form an attorney-client relationship. The training is provided in English and Spanish.

We recently finished up this video about the work we do at CLDC, we hope you enjoy it, and please feel free to share!

The CLDC is encouraging activists and organizations to utilize the Freedom of Information Act and the Privacy Act to request documents and materials that the FBI may have accumulated about you or the group you are active in. Not only will this information assist activist communities in learning about and preventing unlawful government spying, but it will also shed light on the extent of surveillance that has been undertaken in your community. Shine a light on FBI activities by exercising your lawful right to these documents and information.