This past weekend, CLDC staff attorneys Lauren Regan and Cooper Brinson went to Chicago to refine our approaches to police and jail/prison misconduct litigation by attending the National Lawyers Guild’s National Police Accountability Project “Police Misconduct Trials A-Z.” In addition to honing our skills, we met with several NLG movement attorneys, and learned about some of the impressive strategies being employed by a variety of groups to address the Chicago Police Department’s war against (primarily) poor POC neighborhoods. CLDC attorneys learned valuable lessons that are sure to improve the effectiveness of our work around the country.

On the first day of the conference, we heard from long-time civil rights attorney John Burris and co-presenter Lois Heaney. Burris is known for his representation of Rodney King (in his civil suit), Tupac Shakur, Oscar Grant (executed by BART police), and several others. He has been at the forefront of civil rights litigation in the Bay Area and beyond. The presenters gave helpful tips on developing a theme for civil rights cases, conducting voir dire (jury selection), and crafting compelling opening statements. We heard about Burris’ experiences in dealing with unconscious bias in jurors and learned strategies on how to identify and mitigate the harmful effects of implicit/unconscious bias in prospective jurors.

After that, we heard from Jon Loevy (of Loevy & Loevy, a Chicago-based civil rights firm) and learned valuable tips for cross-examining police officers and other defendants in a civil rights law suit. The session was deeply informative and useful. At the beginning of the session, Loevy mentioned how his firm had managed to obtain over $200 million in judgments and settlements against Chicago-area law enforcement over the last fiveyears. As the conference went on, several people wondered whether the apparent high-dollar payouts were having any effect at curtailing police abuse in Chicago. In civil litigation, often the only semblance of justice rendered to those who have suffered at the hands of law enforcement is money. Occasionally, settlements can include policy changes, but such changes are rare (and it is even rarer that such policies have a direct material benefit for communities subject to systematic police violence). Some attorneys questioned whether the financial penalties against municipalities like the City of Chicago were having the intended effect at punishing and, therefore, curtaining abuses by law enforcement.

Follow Mr. Loevy, we heard from Melinda Power and Janine Hoft. CLDC previously worked with Power on several cases from Standing Rock and has been instrumental in organizing the legal defense and civil litigation for Standing Rock water protectors. Hoft is a long time attorney with the Peoples Law Office in Chicago.  The presenters discussed methods for working with and examining plaintiff’s witnesses. Given their background in dealing with individuals and communities that have suffered traumatizing and horrific injuries by law enforcement, the presenters discussed some simple tactics to work with people who have undergone traumatic violence. As attorneys, we often knowthat our clients have endured some form of serious trauma, but we are not always the best at communicating in ways that recognize or respect that trauma. Power and Hoft did a great job explaining how to discuss and prepare plaintiffs and witnesses to share their trauma in a courtroom, while minimizing the potential re-traumatizing effects of incident(s) that led to their injuries.

At lunch, during the first day, we also had the privilege to hear from Aislinn Pulley of Black Lives Matter Chicago. Pulley described the network of groups and individuals that helped form BLM Chicago and a brief history of the struggles for Black Liberation in Chicago as well as the prison and police abolition movements.

After the lunch break, we attended a presentation from the Invisible Instituteon how to hold law enforcement accountable using sophisticated data sets and public records. Specifically, we learned about the II’s “Citizens Police Data Project.”  This project tracks individual police officer violence using the Chicago Police Department’s own data, data derived from citizen complaints, citizen interviews, social media, and several other sources (Chicago is a rare gem in that it publicly discloses police misconduct and disciplinary records unlike Oregon and most other States). It is one of the most comprehensive data sets that we’ve seen that is able to track police violence. In addition to the actions of an individual officer, it examines geographic areas where police violence is most likely to occur. The “back end” of the data system used by II is available on Github. The work of the Invisible Institute looks like an extremely valuable resource to chart systemic police violence and racial profiling, and if reproduced for other cities (provided such data is legal obtain in those cities/states), could be a necessary tool for law-based and traditional organizers in proving racial profiling and other systemic abuses by the State.

We heard several additional speakers throughout the rest of the first day, including some powerful tips on closing argument from Larry Rogers Jr. (of Power, Rogers & Smith, a Chicago-based firm), and an engaging discussion from Jeff Scott Olson (Madison, WI) on attorney fees if you win a federal police misconduct case.

After the first day, CLDC attorneys joined other NLG attorneys near the site of the infamous Haymarket Square. We chatted about different case strategies and challenges, and learned about the work that others are doing around the country to hold law enforcement accountable for civil rights violations.

On the second (and final) day of the conference we learned about cross-examining expert witnesses from Sheila Bedi. Bedi is a Clinical Associate Professor of Law at Northwestern University (Chicago). She elaborated on the difference between a juror and attorney’s view of an expert, the difference in the expert’s role during and prior to trial, and how to handle difficult defense expert witnesses.

Following that, we learned about efforts toward restorative justice being made by the Northside Transformative Law Centerin Chicago. This session was led by NTLC’s executive director Emmanuel Andre and focused on several aspects of the restorative justice process and how attorneys can incorporate restorative justice in their work. Andre asked the attorneys in the room to consider some hard questions about the nature of the work attorneys do in communities that are often very different than the “home” communities of the attorneys. He asked us all to pay careful attention of what we are actually contributing to communities that have been terrorized by police violence. Are we just going in, filing suit, getting a judgment/settlement, and then moving on? Or, are we actively seeking ways to positively contribute to these communities beyond litigation? If we are trying to contribute, how are we making those contributions? Are we taking direction from groups/individuals in those communities? Are we really listening to the needs of those communities? Or, are we imposing, by way of our privileged status in the professional class of attorneys, our ideas of what ought to be done in those communities?

The last presentation we attended was from Nathaniel Gilham and Rodney Walker of the Chicago Torture Justice Center. This Center is focused on rebuilding and assisting groups and individuals who were subject to the torture programs ran by disgraced Chicago Police Commander Jon Burge. From 1972 through 1991, Burge essentially oversaw the torture of over 100 individuals (that we know of) in police custody in Chicago’s Southeast and West Side. Once the torture allegations were confirmed, it was too late to sue the City or involved officers (the statute of limitations had passed), so people in Chicago found another route to attempt to get justice for the survivors (and survivor’s families) of the torture regime—they passed an ordinance. The ordinance, passed in 2015, required the City to 1) institute formal education programs in Chicago public schools to teach young people about the torture, 2) issue a formal apology to the survivors and their families, 3) provide free college tuition to survivors and their families, 4) $5.5 million in compensation (we were told that most survivors received somewhere around $100,000 each), 5) erect a public memorial to the survivors, and 6) provide a free counseling and counseling center for survivors and their families. Conference participants were asked to consider what the healing process should look like for communities that have been subject to systematic police violence.

After the conference ended on Saturday, Cooper headed out to meet with some Chicago-area activists to learn about some of the other work going on in Chicago. He, along with Chicago-based civil rights attorney Brian Orozco, went out to an event organized by the newly formed Chicago-based Save Money Save Life. The organization was founded by Chicago-based rapper, artist, producer, and song-writer Vic Mensa and longtime organizer and activist Laundi Keepseagle. Keepseagle has previously worked on several issues and campaigns for indigenous rights (particularly issues surrounding the struggle at Standing Rock). 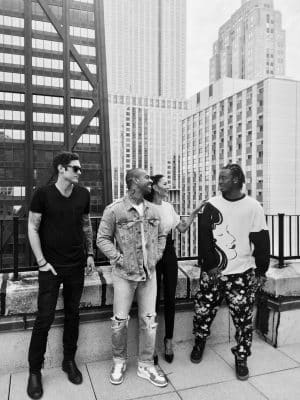 Cooper with Vic Mensah, Laundi Keepseagle, and Malcolm London of the SMSL crew

SMSL is focused on providing “vital resources to those who need it most” and grounds its work in areas of mental health and environmental justice. The event attended by Cooper and Brian was a celebration and fundraiser for SMSL’s “StreetMedic” team (s). These teams, coordinated by Dr. Prerana Rudrapatna, are designed to raise awareness and educate Chicago’s underserved neighborhoods on emergency and mental health first response. Dr. Rudrapatna, who has trained in trauma units in Chicago, explained that so many people are dying in Chicago neighborhoods from gun-shot wounds because there are no level-1 trauma centers in close enough proximity to these neighborhoods. A gunshot victim can bleed to death within five minutes, but it takes an average of 16.6 minutes to travel to a trauma center from these underserved areas. SMSL saw a need that the City refused to address (despite knowing the problem) and decided that, if the City won’t take care of it, they have to take care of it.

In building the better world that we all know is possible, we must listen to and support these kinds of organizations. The CLDC is committed, whenever possible, to support this type of organizing and struggle.

Special thanks to the National Lawyers Guild’s Police Accountability Project, the People’s Law Office, Haddad & Sherwin, and everyone involved in making the conference a valuable learning experience!  Now back to the trenches!