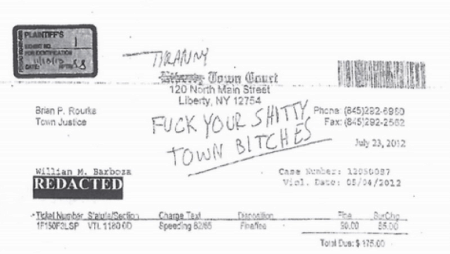 Last week, a federal court in New York affirmed the First Amendment right to criticize police using profane language. In the case, Barboza v. D’Agata, the federal court in the Southern District of New York addressed a case in which an individual received a speeding ticket in the town of Liberty, New York. He agreed to pay the ticket by mail, but first decided to make his feelings clear by crossing out the town’s name “Liberty” and writing “Tyranny” on the ticket, and then writing, in all capital letters, “FUCK YOUR SHITTY TOWN BITCHES.” He then sent in his payment with this special personalized message.

In response, a local prosecutor decided that the individual, Barboza, should be charged with “aggravated harassment.” The local judge rejected the payment by mail and ordered Barboza to appear in court. When Barboza came to court, the local prosecutor told a police officer to arrest Barboza and charge him with aggravated harassment. When the judge called Barboza, he reprimanded Barboza and told him he would be arrested. Barboza was arrested and charged with harassment, but eventually, the criminal charge was dismissed.

Barboza filed a federal civil rights lawsuit for this violation of his First Amendment rights. The court ultimately found that the local prosecutor had violated Barboza’s constitutional rights. For decades, the US Supreme Court has acknowledged that the First Amendment right to free speech includes the right to question and criticize police officers. The constitutional right to criticize police officers includes the right to use profanity.

Moreover, the court found that this was not the first time local police had arrested citizens for “vulgar language.” Even more troubling, the police received no training on the First Amendment:

“From 2000 to the date of plaintiff’s arrest the village did not provide training to its officers concerning Section 240.30(1) or on the First Amendment limitations of arrests for speech or written expression. Similarly, neither the Village of Liberty Police Department general rules of conduct nor the Liberty Police Department rules and regulations and manual of procedure contain guidelines about arresting people under 240.30 or for abusive expression. The village has no requirement to insure its officers are trained on the First Amendment. The village seemed to rely in this respect on the Police Academy training that officers are required to obtain before being hired, but takes no steps to freshen its officers’ understanding as the law develops. The village police department does not maintain hard copies or an electronic database of caselaw when making arrests. They rely on the black letter law found in the penal code.”

The court ultimately decided to allow Barboza’s case to go to trial to determine whether the police department’s failure to train officers on the First Amendment constituted an additional violation of his constitutional rights.